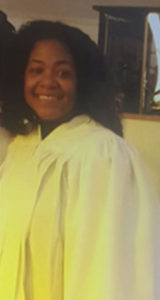 Youth Pastor
youthpastorsbnlgc@gmail.com
Reverend DeKisha Williams is a wife, mother, daughter, sister, aunt, and a friend to many; but her most important relationship is being a child of the Most High God.  Like many others, despite the values her mother instilled in her at a young age, she decided she would try and do things on her own.  No matter how hard she tried, she never really fit into the places, situations or groups that she put herself into.  After years of running from the Lord and the calling that he placed on her life, she decided to leave everything that she knew and truly rededicated her life to Christ June 15, 2014.  She began to truly see the Lord and his plan that he had for her life.  In due time the Lord confirmed what she had questioned for many years, that he did in fact call her to preach the gospel on November 22, 2015.  She is now not only an evangelist of the gospel, but alongside her husband, she was ordained on November 26, 2017 to also serves as a Youth Pastor at Bethesda New Life Gospel Church under the leadership of Rev. Jesse L. Richardson, Jr., Senior Pastor.  Pastor DeKisha is more than grateful that the Lord has trusted her with both His Word and His people.  She is on a mission to develop a deeper relationship with the Lord not only for her benefit, but so others may be saved as well.