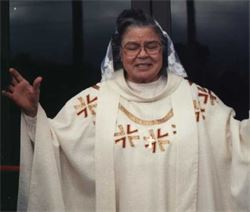 Brief History of Our Church

On September 2, 1972, the late Frank R. Killingsworth, founder and Supervising Elder of the Kodesh Church of Immanuel was invited and met with a group of persons for the purpose of organizing this church – BETHESDA. God blessed us with seven charter members: Robert Farmer, James Long, Virgust Cunningham, Susie Doleman, Virginia Long, Lillie Collins and Rev. Iola B. Cunningham as Pastor.

After we became organized in the body of the Kodesh Church of Immanuel, we began seeking a building for our church home. Bethesda’s first service was held on Sunday, November 5, 1972, in the home of Virgust and Iola Cunningham. Our Pastor’s first message to Bethesda was taken from St. Matthew 16:17-18, theme, “Jesus Promises To Build HIS Church.”

Several months later, in March 1973, God supplied us with a building – 331 15th Street, N.E., Washington, D.C. God richly blessed in the first seven years: Ministers were called and ordained to the Gospel; and many souls were added to the church. The end of those seven years marked the climax of Bethesda under the body of the Kodesh Church of Immanuel. In 1980, by request, the Office of Recorder of Deeds granted the body her independence under the New Life Gospel Church Organization. The church’s name became BETHESDA NEW LIFE GOSPEL CHURCH.

On Sunday, December 4, 1994, Bethesda closed her doors for the last time in a Sacrificial Praise and Thanksgiving Service at the location where she had remained for 21 years.

AND SO …
The Lord declared to Pastor Cunningham “…as I was with Moses, so I will be with you. I will not leave you nor forsake you.”

The Lord made arrangements to keep the church together. On Sunday, December 11, 1994, Bethesda began having its services in the Chancy Spruell Community Center at 3517 Jay Street, N.E., Washington, D.C. This Center was in the heart of the community where the Lord directed Pastor Cunningham in the vision.

On Memorial Day, Monday, May 30, 1995, Bethesda held a Ground Breaking Service on the property it held for many years determined to lay a new cornerstone in new soil, as given by God. The Lord allowed the Church to watch Him build the new church from the foundation up on the property dedicated and set aside for that purpose.

In September 1995, in the middle of construction, the Lord opened the windows of heaven and again blessed Bethesda with a new ministry under the direction of Rev. James and Rev. Mamie Green – The Revealed Truth Ministry in Mineral, Virginia. To God Be The Glory!

On Saturday, December 16, 1995, at 11:00 a.m., a Ribbon-cutting Service was held to open the doors to Bethesda presently located at 750 Kenilworth Avenue, N.E., Washington, D.C. God is gracious and to Him be glorified!

In 1998, the Lord added five ministers to the BETHESDA body, Rev. Mary Benbow, Minister Jeffery Hines, Evangelist Dennise Glover, Evangelist Pearl Miler and Evangelist Wydenia Saunders. “For the perfecting of the saints, for the work of the ministry, for the edifying of the body of Christ.” (Ephesians 4:12)

During our 18th Annual Holy Convocation (June 2000), the Lord directed our Pastor to ordain Evangelist Jeffery Hines and Evangelist Wydenia Saunders. Not that the Lord was finished with this year, Deacon Jesse Richardson was licensed to be an Evangelist in November 2000.

In June 2001, during our 19th Holy Convocation in Bristol, Tennessee, the Spirit directed Pastor to ordain Bro. Norman Lorick as a Deacon in the Church. “Look ye out among you seven men of honest report, full of the Holy Ghost and wisdom, whom we may appoint over this business.” (Acts 6:3).

By a proposal submitted by Bro. Alex Avant in July 2002, and accepted by the Advisory Board, a new ministry has been added to the Church. It’s our NewMembers Processing Ministry. This Ministry has been established to go a step further in welcoming new members in the Church. Pictures are being taken to assist the membership in recognizing, greeting and loving the new member. Pamphlets are being issued, giving the new member a synopsis of the ministries in the Church, to assist them in the selecting where they may desire to work in God’s vineyard.

The Lord added in our December 2002 end-of-the-year meeting, nine (completeness) new Helpers to the Helpers Ministry. They were: Sis. Aziza Avant, Sis. Meisha Lorick, Bro. Bobby Reed, Sis. Teresa Reed, Sis. Priscilla Seaborne, Sis. Anita Upshaw, Sis. Angela West, Sis. Tara Byers and Sis. LaTatia Whitaker. The Church looks forward to greater works from the Helpers Ministry. We continue to give God all the glory for the work He is doing in Bethesda.
The Lord works in mysterious ways. In our 21st Annual Holy Convocation held at Bethesda on Saturday, June 19, 2003, Pastor Cunningham was led by the Spirit to ordain Evangelist Jesse Richardson, Jr.
On Sunday, December 21, 2003, the Lord was at work blessing Bethesda with a new Evangelist. Deaconess Daffney Archer gave her trial sermon and was licensed as one of Bethesda’s very own Evangelist.

Since the opening of the doors, many changes have taken place. Many souls have been saved and delivered. Whole families have joined the church adding their own bricks in the cornerstone of this Church. For the Lord has declared, Bethesda shall live! WE GIVE HIM ALL THE GLORY!